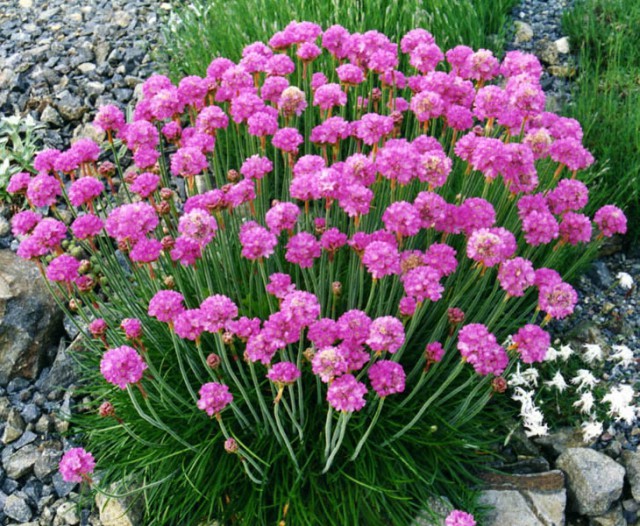 Armeria maritima, also known as sea thrift, is an herbaceous perennial in the sealavender family (Plumbaginaceae) that grows in mountains and temperate coastal regions of the northern hemisphere, specifically northern Europe from northern California to Iceland to Siberia. The species is divided into several geographic subspecies based on flower morphology and pollen structure. Many plants cannot survive in salty coastal environments where it grows. It is also called common thrift and sea pink.

Evergreen plants grow only 6 to 12 inches tall, and their tap roots are woody. Usually hairs are present along the margins of the stiff, linear, dark-green leaves forming the slowly expanding mounded tuft. The dense rosette looks like a low-growing ornamental grass. The leaves of plants growing on richer soil tend to fall outward, leaving an open center. Due to its evergreen nature, it shouldn’t be cut back to the ground in the fall, which will affect spring blooming.
A small cluster of pink-to-lavender (or sometimes white) flowers appears in mid-spring, surrounded by purplish, papery bracts at the tips of unbranched, leafless stalks that tower above the foliage.

The five petals of each flower are joined at the base by five stamens and five styles. Deadhead entire flower stems throughout the summer to encourage sporadic flowering. Cut flowers can be used. A papery seed head follows the flowers, which contains one seed in each capsule. In full sun, sea thrift grows best in soil that is lean and very well drained. Drought-tolerant plants dislike moist soils. In heavy clay, too fertile soils, or after a prolonged period of wet and cool weather, they often rot in the center, killing the whole plant. Hence, they are known for their short lifespan. Plants that are given the right conditions, however, can be long-lived and require little maintenance.

Use sea thrift in rock gardens, as an edging at the front of perennial borders, or in dry, gravelly to sandy areas. Even when not in bloom, its dense, mound-shaped form makes it a good textural contrast with other low-growing plants (but make sure to plant it somewhere that won’t be overrun by taller, spreading perennials). Mix it with other small plants in a container. This plant does well in trough gardens, which provide the perfect drainage it needs to thrive. It is also unlikely to be overrun by other larger plants.
Sea thrift usually blooms in the second year after being propagated from seed. It can be sown in spring or fall. By spring divisions or basal cuttings in summer, it can also be propagated vegetatively.
A variety of cultivars are often available, not just the species:

There is a white stripe on each leaf edge of ‘Nifty Thrifty,’ a British selection.