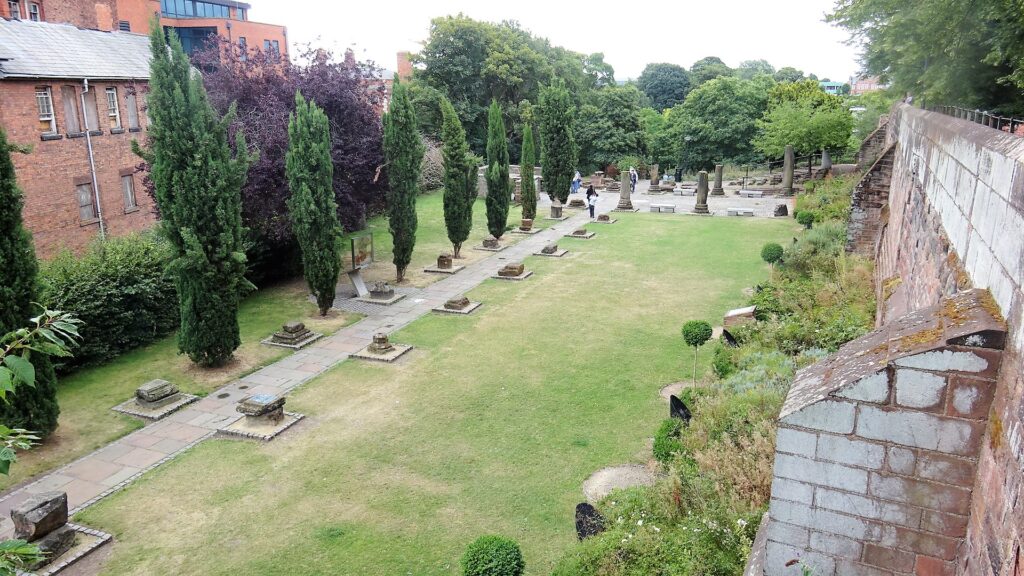 The Rows
These are the galleries that run through the fronts of the houses at first-floor level on the four main streets in the city center. The Rows gave access to the main living accommodation, the first-floor halls. At the row front, there may have been separate shops, but in the smaller examples, the hall itself doubled as the shop. Many were built during the prosperous times of the thirteenth century.

The Cross
At the junction of Watergate Street, Eastgate Street, and Bridge Street. The heart of modern Chester was also the center of the Roman fortress. Today’s main streets still follow the lines of the Roman originals. The cross itself is medieval. It was pulled down in 1646 but replaced in its original position in 1975. This was the main market place in the medieval period, in front of St Peter’s Church.

The ruins of the original medieval cathedral of Chester. St John’s was founded in 689 and served as a cathedral from 1075 to 1102. Early in the twelfth century St John’s embarked on an ambitious rebuilding program. It was probably intended to construct two western towers but only one was ever built, which dominated the Chester skyline until it collapsed in 1881. Half of this fine Romanesque church survives in use, the rest is ruined.

On the south side of the River Dee in Edgar’s Field. This was the source of the building stone for the fortress. A shrine to the goddess Minerva was carved into the rock by the Roman masons. This is a unique monument. Over time the stone has weathered so that now only a faint outline remains. The opening to the right, known as Edgar’s Cave, is possibly a natural fissure that was enlarged after the shrine was carved

The strongroom of the Roman military headquarters in Hamilton Place, just off Northgate Street. This was a secure storage area for the army’s pay chests.

The Roman amphitheater was built in a commanding position and dominated the south-eastern side of the fortress. The first amphitheater, built in the late first century was constructed of stone and had timber-framed seating. This was later replaced by a second much larger stone building – the biggest amphitheater in Roman Britain.

The Roman amphitheater at Chester was the largest in Britain. Used for entertainment and military training, there have been two stone-built amphitheaters on the site.

The first included access to the upper tiers of seats via stairs on the rear wall, as at Pompeii, and had a small shrine next to its north entrance. The second provided seat access via vaulted stairways. The two buildings differed from each other and from all other British amphitheaters, underlining the importance of Roman Chester.

BEFORE YOU GO
Access: A level pavement and footpath surround the excavated areas of the amphitheater (around two-fifths is visible), which have a clear view down to the site. The central theatre area is only accessible via several steps.

Opening times: Open daily all year round during daylight hours.

Parking: There are several paid car parks in the city center a short walk from the Amphitheatre.

Facilities: There are shops, food outlets and toilets nearby in the city center.

Groups and Schools: Schools and groups should contact the Grosvenor Museum to arrange a visit. Call 01244 972197.

Please be aware: English Heritage does not permit drone flying from or over sites in our care, except by contractors or partners undertaking flights for a specific purpose, who satisfy stringent CAA criteria, have the correct insurances and permissions, and are operating under controlled conditions.